It is brewed by special method and yeast using the rice polished to 60% or less.

There are 2 types in this category.

In this type, distilled alcohol is added before pressing Moromi(The mixture of the liquid and solid which are made through fermentation process) into Sake(liquid) and lees(solid).

By adding distilled alcohol, rich aroma “Ginjyo-ka” can be effectively moved into Sake.

In this type, the sake is brewed with only rice and rice koji(rice onto which koji-mold has been cultivated) and has comparatively mild aroma and flavor. 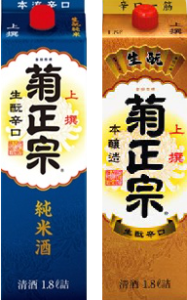 The result of the National Bureau’s Research Institute of Brewing(全国新酒鑑評会) for the Brewing Year 25 is released.

Refer to the report of result(in only Japanese)

I always find that many major brewing companies are listed as the gold prize winners although it’s common among sake fans that the sakes brewed by major sake breweries are not delicious.

Judging from this fact I think that although major sake breweries have been succeding to keep and develop their high brewing technique they are mainly brewing mid and low range sakes since these range sakes still occupy the big share in a market .

In the meanwhile there are mainly three features in the National Bureau’s Research Institute of Brewing that are shown as below;

– The National Bureau’s Research Institute of Brewing is a contest sponsored by national government which can not be found in the world as alcoholic beverage contest.

– The sakes evaluated in this contest are not for commercial but are specially brewed just for this contest and we can not try them.

– Almost all sakes displayed there are alcoholic added sakes in order to take special aroma and flavor out.

Today I converted my wine cellar into sake cellar by taking out inside shelfes, so that sakes can be stocked standing.
Since cap of sake bottle is made by alumi, it’s better to keep the bottle standing in order not to let sake tach alumi cap. 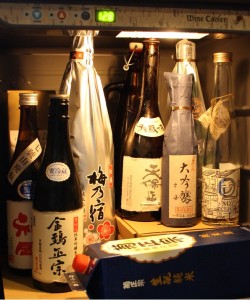 In the meanwhile I also cover the window of the cellar by sake packages in order to interrupt light which possibly deteriorate quality of sake. 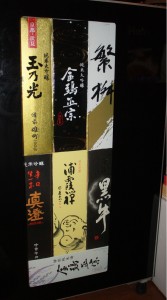 Although there are some persons who deny adding distilled alcohol to sake without argument, I at least am the position of accepting according to the purpose.

When internationalization is considered, of course, it is a fact that there is criticism of treating the sake which is added alcohol same as a Junmaishu(純米酒 brewed by only rice and rice-koji).

Althoug I think such a argument have to be considered carefully, we need to also understand the meanings of alcoholic addition exactly.

The purposes of adding distilled alcohol;

Small amount of alcoholic addition is very effective to obtain a fruity aroma like especially an apple, a banana, or a melon, and many breweries have added alcohol for this purpose.

This is why most of sakes which are desplayed and evaluated in the National Bureau’s Research Institute of Brewing(全国新酒鑑評会) are with alcoholic addition and it is said that Jyunmaishu(純米酒 brewed by only rice and rice-koji)is difficult to be awarded because of this reason.

For example, Dewazakura Oka Ginjyo(出羽桜 桜花 吟醸) is famous for its very enticing fruity aroma among sake fans and I also like this sake very much.

I do not generally regard the alcoholic addition improper way of brewing as far as it’s conducted for the reason of 1) and 2).

Distilled alcohol is frequently added in order to cut brewing cost.
Many people deny alcoholic addition for this reason.

Did you understand saying that the talk is not simple?