Sake is brewed by such a unique and delicate method that is otherwise incomparable.

It’s greatest feature is a fermenting method called Multiple Parallel Fermentation.
By being based on this method, sake has realized high alcohol content unachievable in other brewage.(Please refer to (4))

The unique brewing process is explained according to the following figures. 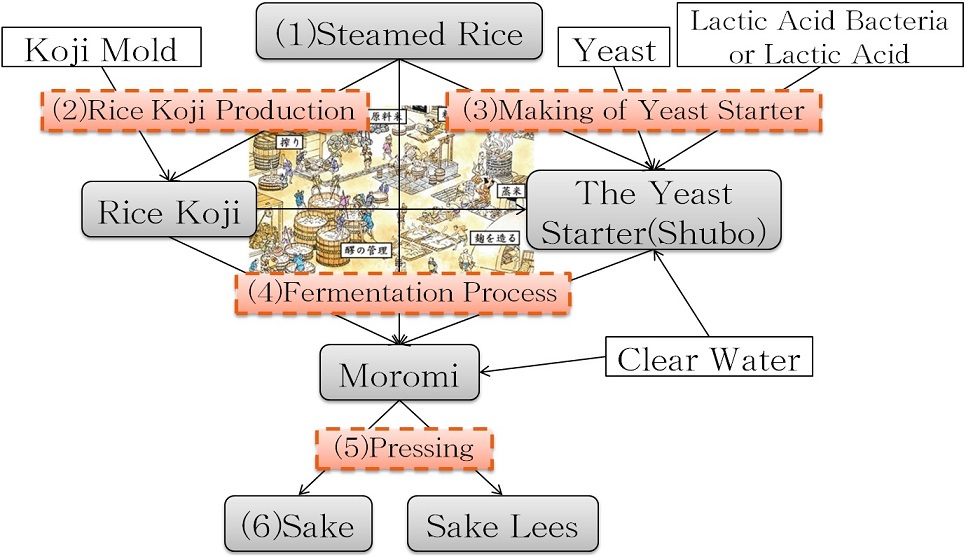 In order to make Steamed Rice, it is necessary to pass through some important processes.

First is Rice Polishing.
Quality of sake will change a lot by the degree of the rice polishing.

If  the rice polishing rate is high, it comparatively produce an expense of a whole new  refreshing sake taste.
On the other hand, if a rice-polishing rate is low, it will become a so-called thick sake with various added flavor, however still claimed as likable by other people who tasted it.

After the washing process rice is soaked in water as preparation of next steaming process.
It is thought that this process is a very important process of determining the quality of sake.
The time of soaking is strictly managed with a stopwatch in consideration of environment, such as humidity and temperature etc.

Soaked rice is steamed and after cooling it is separated into three purposes;
One for “rice koji production”
One for “making of yeast starter”
and
One for “fermentation process” 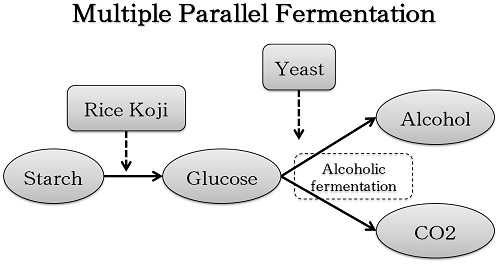 Rice Koji Procuction is a vitally important process in sake brewing.
Although making rice koji can be conducted on a machine in the major brewing company,  brewers who think quality as most important thing thus adhere to handmade still exist.
Since good rice koji is the most important condition of a good sake, a chief sake brewer (杜氏 Toji)puts his heart and soul into rice koji production, sacrificing  sufficiency of his sleeps.
Since koji is a living thing, it sensitively reacts to even of little change on the environment.
Therefore, the chief sake brewer cannot let rice koji become out of sight even just for a little time.

(3)Making of A Yeast Starter

Glucose made from rice is decomposed into alcohol and carbon dioxide by alcoholic fermentation.
In this alcoholic fermentation, yeast plays the main role.
The purpose of “making of a yeast starter process” is to make the yeast increase.
There are two methods of making a yeast starter.
One is a traditional method named “Kimoto(生酛)”, and the other is “Sokujyo(速醸)” developed in 1910.

In the traditional method “Kimoto(生酛)” lactic bacteria is taken, which is a very time-and-energy consuming method.
Therefore, this method is no longer or is seldom adopted nowadays.
However, since there is a deep and alluring sake taste  made through this method, there are still many fans requisitioning hence there are still sake brewers adhering to this method.
In the meantime, although Yamahai(山廃) is the method which omitted the procedure of a part of Kimoto(生酛), quality of sake does not change a lot with Kimoto(生酛).

Notwithstanding, in the method “Sokujyo(速醸)” lactic acid is used instead of lactic acid bacteria.
Since this method is rather simple compared with “Kimoto(生酛)”, many sake brewers are adopting this method nowadays.

There are two conspicuous features in the fermentation process of sake.

The other is Sandan Jikomi, which is the brewing method performed in three steps.
In each step rice koji, steamed rice and clear water are added.
By adopting such a method, the acid environment which yeast likes is maintainable.

The mixture of the liquid and solid which are made through such a fermentation process is called Moromi.

After fermentation, Moromi is pressed to separate into liquid(sake) and solid remains as sake lees(sake kasu 酒粕).

There are several pressing methods, by which aroma and flavor are change.

a)Fukurotsuri(袋吊り hanging cotton bags)
By this method, moromi is hang after being put in cotton bag.
And sake which is naturally dropped down from cotton bag without any pressure is brought together in a bottle called Tobin(斗瓶).
The sake extracted by this method is called shizukuzake(雫酒) or tobingakoi(斗瓶囲い).
Shizukuzake is usually has a very aromatic and complex aroma and flavor.
However it’s comparatively expensive because of it’s lower yield and productivity.

Please give me your opinion!